Addressing Congress workers in Goa on Saturday, senior Congress leader Rahul Gandhi said, “Whether you call it defectors or traitors, in the heart of every Goan there is a demand to keep them away. I wish to categorically state that those who have ditched the Congress will have no place in the party in the future.”

Ten Congress MLAs had defected to the BJP in 2019 giving the BJP a majority of 28 MLAs in the 40-member Goa legislative assembly.

In his first visit to the state ahead of legislative assembly polls in February 2022, Gandhi said, “This is a political fight but it is also an ideological fight. The culture of Goa, the way of life, is also the way of life of India. We are not just fighting an election, we are fighting for what Goa is going to become. I want Goa to show the rest of India that it can stand together, maintain and protect its wonderful culture and environment.” He said that this was as much a battle of ideas as it was about politics. “How are you seeing your future? Full of hatred? Where our daughters cannot step out at night? Where you cannot speak to each other with love?”

Amid confetti showers, Gandhi, who was on a one-day visit to the poll-bound state, also had a dialogue with fishermen and mining dependents earlier in the day. Gandhi arrived while All India Trinamool Congress (TMC) chief Mamata Banerjee was also in Goa. While Banerjee repeatedly spoke of the shared love of football between Goa and West Bengal, Gandhi literally kicked off the Youth Congress Cup futsal league and kicked signed footballs into the hands of the people gathered at the Dr Shyamaprasad Mukherjee Indoor Stadium in Taleigaon, from a ramp.

The NYAY scheme that the Congress formulated was dissed by the BJP, he said. “If our government comes to power, we will give Goa a concept like NYAY. The focus will be on employment, healthcare, employment, tourism and put Goa back on road to progress taking bringing together,” he said. Following legal procedures, he said, the Congress would revive mining in the state.

Gandhi said that that the Congress was committed to not let the three linear projects in Goa that cut through the Western Ghats – the doubling of railway tracks, four-laning of a national highway and the Goa-Tanmar Transmission Project – go on. “Whatever happens, we won’t let a beautiful place like Goa become a coal hub. We won’t let the linear projects happen,” Gandhi said. 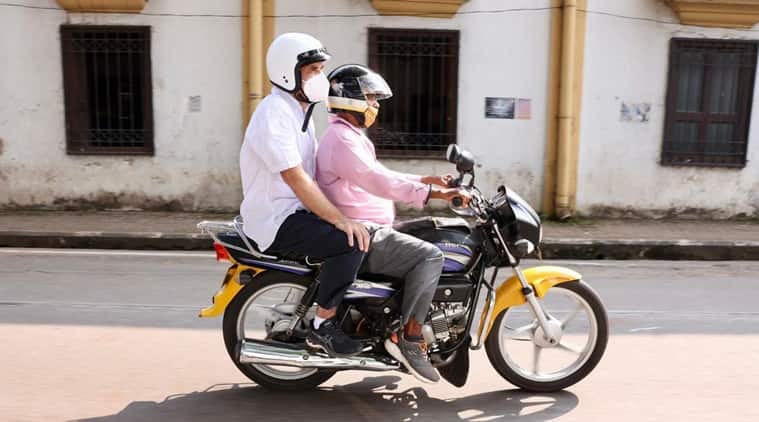 Rahul Gandhi taking a ride on a ‘pilot’, a traditional motorcycle taxi in Goa.

Gandhi said, “I met fishermen, they said the railway line is being doubled, Goa is becoming coal hub, mining-affected people also came to meet me, mines have been shut, lakhs of people have suffered. They said the same person will get the mines. They will be given to that one person by Delhi. Who stands to benefit from the coal hub that Goa is becoming? Is it the people of Goa? Airport, ports, mining, doubling of railways, all for Adani then what do the people of Goa get?” 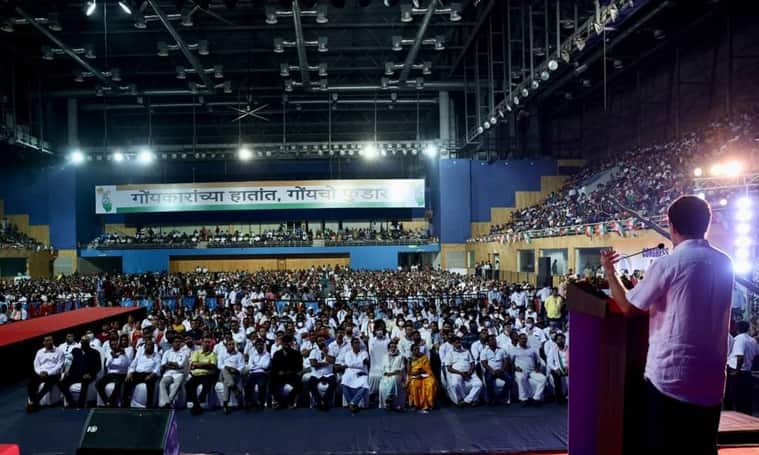 On a day that the Banerjee launched a sharp attack on the Congress for letting Prime Minister Modi “get stronger”, Gandhi’s political barbs were, however, aimed straight at the BJP. 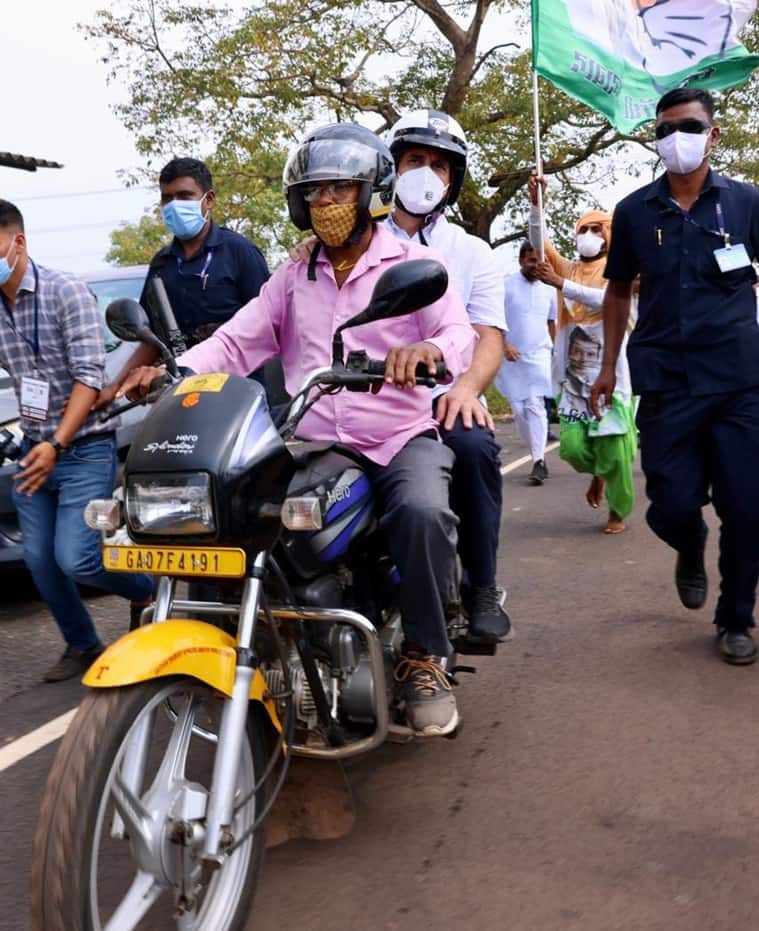 Rahul Gandhi taking a ride on a ‘pilot’ in Goa.

“There are two battles, one on the national level, the other one is in Goa,” he said. “The idea of India which is also the the idea of Goa is being attacked. Who is benefiting and who is losing out? Some years back, the PM came on TV and did demonetisation, then government passed a flawed GST designed to help a few of their friends. And now finally farmers across the country agitated because the BJP, Narendra Modi has passed three bills designed to crush farmers in country. These are not random events. There is a systematic plan, a plan to attack the unorganised sector, small and medium businesses, labour and farmers. Take from them and give it to the richest and most powerful,” Gandhi said.

“I am saying that the Government of India is handing this country over to a few, limited businesses. It doesn’t matter which sector you look at – coal, ports, airports, agriculture, retail, telecom – you will find the same five-six people in sector after sector.”

He also said that the media in the national capital did not portray the right picture of India. “The media in Delhi is a friend of the government, it does not raise issues of farmers, small and medium businesses, labour. We have a tragedy unfolding. At the same time, the Chinese enter, take up thousands of kilometres of land, almost the size of Delhi. It is occupied by them, they are sitting inside Indian territory today. And the PM says no one has taken any land. That is the reality we are fighting at the national level.

Rahul Gandhi also took a two-wheeler ride from Velsao to Azad Maidan in the afternoon.