Boasting white limestone floors, hardwood timber features, a pool, spa, and a feng shui garden, two bedroom flats sell for between $4 million and $8 million according to London estate agents. Residents, meanwhile, like their privacy. Many of the residences are owned by corporations aimed at camouflaging the ultimate owner.

Keeping such secrets is getting harder, however, and earlier in October the Pandora Papers, a massive data leak on offshore finance published by the International Consortium of Investigative Journalists, revealed the existence of two flats purchased in 2006 by a company operating on behalf of Batbold Sukhbaatar, a former prime minister of Mongolia.

They appear to be the same flats in The Knightsbridge Apartments that were the subject of an injunction in November 2020 by a U.K. high court pending legal proceedings in Mongolia against Batbold. One flat was sold in an apparent arms-length transaction in 2017, while in 2018 the remaining flat was transferred to a corporation controlled by individuals. In granting the freezing injunction, the U.K. high court judge said he was “satisfied” that the evidence established that these individuals were “proxies for Mr. Batbold.”

A lawyer for Batbold, however, said the former prime minister bought the flats legally when he was a private businessman, before holding high office, and has since sold them. “Now he doesn’t own the property in question or, indeed, any assets in the UK” he said. The legal proceedings in Mongolia, referenced by the U.K. high court ruling, were opened in October 2020 by the Metropolitan Prosecutor’s Office accusing Batbold of using proxies to siphon hundreds of millions of dollars from local mining companies.

Batbold’s lawyer said that there is no truth to the accusations and the cases against him are inspired by political enemies in Mongolia. Furthermore, he said, Mongolia’s prosecutor does not have the authority to bring the case on behalf of the government agencies and entities named in the suit. “Mr. Batbold was an object of coordinated media and legal attacks orchestrated by his political opponent through shady figures” he said. An iron mine in Govi-Altai Province. Mongolia got lucky, or perhaps unlucky, in 2010 when China suddenly found itself in need of a new source for coal. (Photo by Rentsendorj Bazarsukh)

While Mongolian politicians agree that the accusations against Batbold may be politically motivated, they also agree that the case raises questions about what has become of billions of dollars in mineral wealth generated over the past decade and a half by a mining boom, as Australian, Canadian and Chinese companies have moved in to develop lucrative deposits of coal, silver, gold and copper.

The Pandora Papers made headlines throughout Mongolia, with the revelations going viral on social media. The country’s two major political parties, the ruling Mongolian Peoples’ Party and the opposing Democratic Party, however, have thus far remained silent on the issue.

According to a report by the World Bank, Mongolia has produced $28 billion worth of mineral outputs since 2004. Of this, taxes and royalties amounted to nearly $9 billion in the past 15 years, while the government has borrowed $8.7 billion, mostly by leveraging its mineral revenue. Of that amount, as of 2019, $200 million remained saved as deposits in the Stabilization Fund and the Future Heritage Fund.

“Mongolia has not only consumed almost all its mineral outputs, but has also borrowed heavily against them, bequeathing negative wealth to the next generation,” the report says. “Mongolia risks resembling a ‘resource curse’ economy in a few years.”

The term “resource curse” was first used by economist Richard Auty to describe how an abundance of natural resources can lead to underdevelopment. It is an all too familiar story: A country strikes it rich, but the new avalanche of wealth poisons the political process, corrupts its institutions, distorts the economy and even creates pressures for secession.

For every Botswana, which after the discovery of diamonds has one of Africa’s highest per capita incomes, or Qatar, where the discovery of gas in 1995 has helped to boost gross domestic product to $175 billion from $8 billion, there is a Nigeria or a Sierra Leone, where mineral reserves have been directly linked to dysfunction and even conflict. 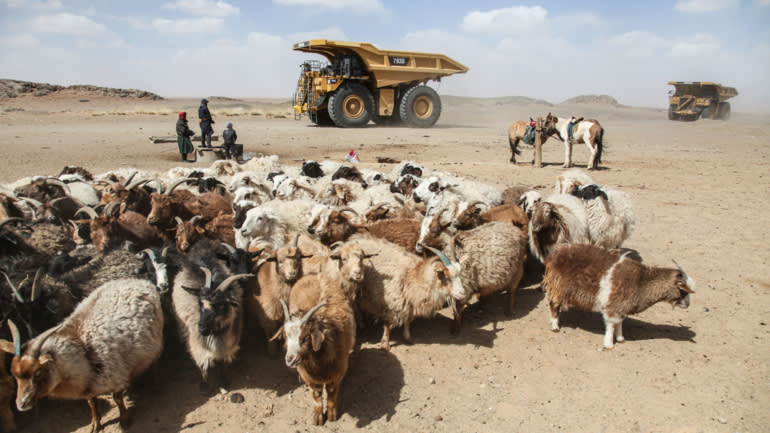 Mining trucks are seen around the Oyu Tolgoi copper mine in Hanbogd Sum of South Gobi Province. (Photo by Rentsendorj Bazarsukh)

Mongolia’s mining boom was the lucky — or unlucky — result of events far beyond its borders. In 2010, Australia’s coal mines suffered their worst floods in decades, halting coal exports to China. Chinese iron ore smelters began to increase coal imports from their northern neighbor. In 2011, Mongolia’s GDP surged 17% in 12 months, primarily due to a coal deposit at Tavan Tolgoi, located 240 km from the Chinese border, and a nearby copper deposit at Oyu Tolgoi.

Today, mining accounts for nearly one-quarter of GDP, and mineral exports represent 26% of fiscal revenue, up from 10% in the early 2000s. Surveys have revealed deposits of coal, copper, gold, rare earth minerals and uranium worth an estimated $2.75 trillion. For a country with a population of 3.3 million, that is enough to make everyone a near millionaire.

But due to unequal access to opportunities, the boom-bust cycle, and corruption, most Mongolians have been unable to benefit. The country’s poverty rate of 28% and wealth gap remain unchanged from early 2012. Paul Collier, who studies resource economics at Oxford University’s Blavatnik School of Government, says that governance is the key to avoiding the “resource curse.” Countries that already have strong governance in place when they strike it rich tend to use any windfall wisely, such as what happened with Norway after the discovery of offshore oil. But an influx of resource wealth can be particularly toxic for countries without strong established governance, like Nigeria.

“The real tragedy, however, is countries where the government looks to be strong but can’t handle the stress of all the money,” Collier said. “This is a real tragedy because it can bring an otherwise healthy country down.”

Mongolians are acutely aware that their resource patrimony is in the process of being squandered. What to do about it remains elusive, and the anger has been manipulated into an effective political instrument by some of the most egregious offenders.

The country’s new president, Khurelsukh Ukhnaa, was elected in June after he ran on the slogan, “Mongolia is the owner of its resources” and showered pensioners with cash from the state budget that he insisted was not an attempt to buy votes.

Beginning last year, when he was prime minister, Khurelsukh paid off 695 billion tugrik ($243.7 million) worth of pensioners’ debts by selling bonds backed by state-owned silver deposits. Then, a month before the election, the cabinet, under the control of Khurelsukh’s party, transferred 216 billion tugrik to debt-free pensioners. Again the money came from bonds backed by state silver deposits.

Khurelsukh repeatedly promised during his campaign that “Mongol citizens must be owners of its natural resources,” as he vowed to establish a Natural Resource Public fund and invest in infrastructure developments that would “pay dividends directly to the people.”

Patronage politics have become routine in Mongolia, where elections have turned into cash giveaways and the country has very little to show for the fire hose of wealth…

The UK ditched coal and left itself with a new set of challenges
West Virginia delegates ask residents how to revitalize former coal towns
Will India use ‘coal shortage’ as an excuse to dilute its environmental laws?
South Africa to call on rich nations to do more at COP26
Australia Pledges ‘Net Zero’ Emissions by 2050. Its Plan Makes That Hard to