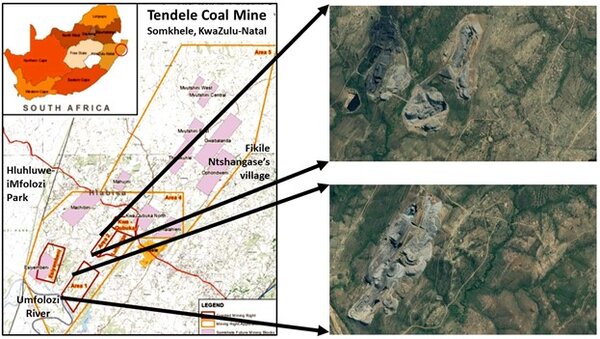 Fikile Ntshangase died aged 63 on October 22, 2020, assassinated by three thugs who entered her house – with several grandchildren playing nearby – and shot her six times, following her success in stalling a local mine’s expansion.

The murder was just one reflection of the multiple forms of fossil-fuel terror in the Somkhele region of northern KwaZulu-Natal, on the border of Africa’s oldest proclaimed nature reserve. But one year after her death, activists across South Africa celebrated her tradition of resistance and across the world, Global Witness and allies made it clear the failure to prosecute her killers and end coal-mining tyranny were unacceptable.

The beneficiary of the killing was meant to be the vast Tendele coal mine, owned by Johannesburg-based Petmin and originally financed in part by the World Bank
World Bank
WB
The World Bank was founded as part of the new international monetary system set up at Bretton Woods in 1944. Its capital is provided by member states’ contributions and loans on the international money markets. It financed public and private projects in Third World and East European countries.

It consists of several closely associated institutions, among which :

1. The International Bank for Reconstruction and Development (IBRD, 189 members in 2017), which provides loans in productive sectors such as farming or energy ;

3. The International Finance Corporation (IFC), which provides both loan and equity finance for business ventures in developing countries.

As Third World Debt gets worse, the World Bank (along with the IMF) tends to adopt a macro-economic perspective. For instance, it enforces adjustment policies that are intended to balance heavily indebted countries’ payments. The World Bank advises those countries that have to undergo the IMF’s therapy on such matters as how to reduce budget deficits, round up savings, enduce foreign investors to settle within their borders, or free prices and exchange rates.

. Reparations demands on Petmin and investors by her community’s lawyers were advanced in court ten days after the assassination, but the immediate prize would be halting the mine’s creep into hundreds more homesteads, in an area renowned both for breathtaking natural beauty and the coal mine’s destructive path (Save our Wilderness 2021).

Hence the unity of environmental, community and potentially even labour movements at these sites of struggle – driven increasingly by militant youth – must in future be the renewed objective of activists and their allies, so that memories of what Ntshangase and her community have contributed never fade, but instead refresh and reverberate.

Their lessons are inspiring but also sobering. To date, the potential connectivities between their activism and potential Global North allies – including those within the same country, South Africa, which is the world’s most unequal society – were generally too weak to establish sufficient counter-power to defeat what is called, in this region, the Minerals Energy Complex (MEC).

The term MEC refers to a century-old power bloc: the coal mines that feed a dozen massive generation plants run by state energy agency Eskom, that in turn supply electricity to several dozen deep-level mining houses, metals smelters and petrochemical industries, causing the world’s third-highest greenhouse gas emissions per unit of GDP
GDP
Gross Domestic Product
Gross Domestic Product is an aggregate measure of total production within a given territory equal to the sum of the gross values added. The measure is notoriously incomplete; for example it does not take into account any activity that does not enter into a commercial exchange. The GDP takes into account both the production of goods and the production of services. Economic growth is defined as the variation of the GDP from one period to another.
output per person (after only Kazakhstan and the Czech Republic).

And all this relies, still, on the residual-apartheid migrant labour system – hence family destruction and super-exploitation of women – plus ever-generous state permission given to mining houses, to dispossess small farmers of land, so as to dig out more coal, no matter how drought- and pollution-creating this form of energy has been. Coal leaves eastern South Africa with several of the world’s worst air-pollution hotspots for nitrous oxide and SO2, as Greenpeace has demonstrated, not to mention the water despoliation litigated regularly by the Centre for Environmental Rights (2020).

In fighting the fossil fuel industries at coal face, an adverse balance
Balance
End of year statement of a company’s assets (what the company possesses) and liabilities (what it owes). In other words, the assets provide information about how the funds collected by the company have been used; and the liabilities, about the origins of those funds.
of forces – between eco-social movements (typically driven by local women) and multinational carbon-centric corporations (mainly run by older mostly-white men) – is evident nearly everywhere, across the world. And as is clear from the coastal areas near Ntshangase’s residence, the resulting climate chaos mainly hits the poor. More evidence of this emerged in 2020, because in spite of economic lockdowns caused by Covid-19, the year provided what Yale Climate Connections researchers Jeff Masters and Dana Nuccitelli (2020) list as these top ten ecocidal events:

This latter point includes catastrophies such as floods that devastated China, India and Pakistan, causing more than $40 billion in damage, and the climate-related locusts that spent 2020 eating $8.5 billion worth of crops in the Horn of African. The Atlantic and Gulf hurricanes caused another $40 billion in damage, including in the wealthy U.S., as did forest fires, with the overall cost of 2020’s climate damage estimated by Christian Aid (2020) at $150 billion. But in relative terms, the ability to survive in East Africa or Bangladesh is far less than East Texas, because in the Global South, only an estimated 4 percent of 2020’s damage was formally insured, compared to 60 percent in the North (Christian Aid 2020).

In Southern Africa, the most damaging climate-crisis episode was the March-April 2019 confluence of three processes:

If not these weather warnings, what will shake South Africa’s society and ruling class from a boiling-frog future? Some imagined Covid-19 would,…