The 30-second television ad came out way back in 2010, but it just might haunt Democrats — and humanity — for eternity. Joe Manchin, then the governor of West Virginia,struts through the Appalachian woods, a bolt-action rifle in his right hand and what appears to be a paper target over his left shoulder. Touting his endorsement by the National Rifle Association, he rattles off a series of talking points, each punctuated with the jab of a finger: protecting Second Amendment rights; taking on Washington “to get the federal government off of our backs and out of our pockets”; cutting federal spending; repealing “the bad parts of Obamacare”; the fact that he “sued the EPA.” Then he removes a round from the pocket of his hunting jacket, loads his gun, and points it at the target. “I’ll take dead aim at the cap-and-trade bill,” he says. After he pulls the trigger, a close-up on the target reveals that it’s literally the text of the American Clean Energy and Security Act. “’Cause it’s bad for West Virginia!” he says matter-of-factly.

One year earlier, at the 15th United Nations Climate Change Conference in Copenhagen, Denmark, the United States committed to reducing its emissions by 42 percent by 2030 if an international agreement could be reached. President Barack Obama left Copenhagen without such an agreement, and his first midterm election came and went without a climate bill. Since then, atmospheric concentrations of carbon dioxide reached 415 parts per million for the first time in 3 million years. The last time there was this much carbon in the air, forests grew in Antarctica, the Greenland ice sheet did not exist, and sea levels were more than 50 feet higher than they are today. Our species did not yet walk the earth. The U.N. now describes climate change as “code red for humanity.” Heeding the scientists, the Biden administration has revised the Obama targets upward, setting a goal of reducing U.S. emissions by 50 to 52 percent compared to their domestic peak in 2005 by the end of this decade.

And right on cue, Manchin, now a senator, is once again taking aim at key climate policies moving through Congress. According to the New York Times, Manchin killed the Clean Electricity Performance Program, part of President Joe Biden’s Build Back Better plan, which would have been the primary driver of emissions reductions from utilities. The Times reports that a proposed fee on methane emissions, which would reduce the concentration of a potent greenhouse gas with 84 times more short-term warming potential than carbon dioxide, is also in Manchin’s crosshairs. This leaves about $300 billion in tax incentives for clean energy to do most of the heavy lifting of decarbonization in the reconciliation bill.

That’s enough, according to some. The Rhodium Group, a research firm founded by former Obama administration officials, says that it is still possible for congressional legislation, federal regulations, state actions, and market forces in combination to cut emissions in half by 2030. Whether or not you and I find this plausible isn’t immediately relevant. It’s our only shot. What is relevant is whether the world leaders assembling for the 26th United Nations Climate Change Conference in Glasgow, Scotland, this week find all of this believable enough that, like Biden and the majority of Democrats in Congress, they are willing to bet their political and economic fortunes on such a story coming true. 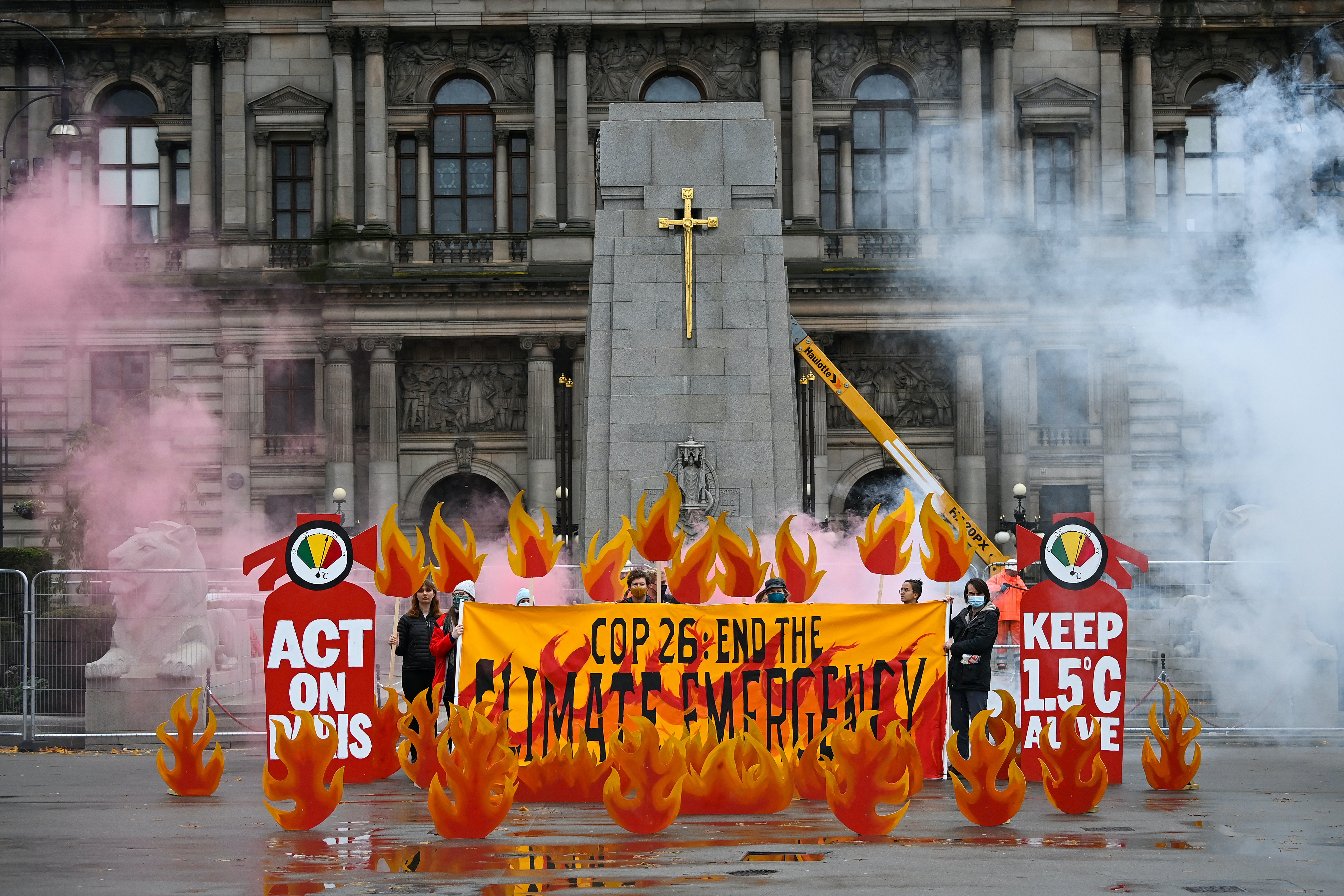 Activists set up a symbolic field of climate fire to welcome world leaders to the 2021 United Nations Climate Change Conference, on Oct. 28, 2021, in Glasgow, Scotland.

“Closing the emissions gap will be one of the most challenging things the US has ever attempted,” reads the recent report by the Rhodium Group, which has been read by key advisers in the White House as well as Senate and House leadership. “Putting this gap in context,” it continues, “that’s the same as zeroing out emissions from the entire state of Florida every year for the next nine years.” The American economy has only achieved those sorts of cuts twice in nonrecession years: 2012 and 2016, the report notes. A lot of things will need to go right if the nation responsible for the largest share of historic greenhouse gas emissions since the Industrial Revolution is to rise to this challenge.

First, according to Rhodium’s model, Congress would need to pass the Build Back Better Act without Manchin or any other Democrat picking off further climate policies in the legislation. In addition to tax credits for wind and solar, Congress would need to keep incentives for an array of clean industries: electric vehicles, distressed nuclear plants, carbon capture and storage, hydrogen fuels, and upgrades to make buildings and homes more energy efficient. Lawmakers would also need to ensure that direct spending to support electric vehicle charging stations, rural electric cooperatives, building electrification, reclamation and remediation of abandoned oil wells and coal mines, soil conservation, and reforestation all remain in various parts of the Build Back Better Act and the bipartisan Infrastructure Investment and Jobs Act also being considered by Congress.

Second, Rhodium says that the executive branch will need to use every tool at its disposal to rein in emissions. Under Administrator Michael Regan, the Environmental Protection Agency will need to impose strong rules on power plants. This strategy echoes the approach taken by Obama, whose Clean Power Plan mandated that power plants reduce 2005 emissions levels by one-third by 2030. The Supreme Court stayed that regulation in 2016, though it was revived by a lower court earlier this year.

According to Rhodium’s analysis, the EPA would need to put the Clean Power Plan on steroids, reducing power plant emissions by 80 percent relative to 2005 levels by 2030 while also writing these new rules in such a way that the now 6-3 conservative majority in the Supreme Court couldn’t stop or hold them up. On Friday, news broke that the Supreme Court would hear appeals from coal companies and Republican states challenging the EPA’s constitutional authority to regulate greenhouse gas pollution. Even if the courts don’t strike down such rules, actions to remand or delay implementation of regulations will only make it harder to cut emissions in half by 2030. If the Biden administration can pull this off, the president and his party would effectively become the lucky owners of the death certificate for American coal power.

Third, according to Rhodium’s study, states need to aggressively pursue policies to reduce pollution. The Rhodium report identifies nine policies the 25 states that are members of the U.S. Climate Alliance can pursue to this end. First among them is a clean electricity standard — the utility sector policy more recently called the Clean Electricity Performance Program in the Build Back Better Act. Other policies include aiming for all new vehicles sold to be zero emissions by 2035, laws to reduce car travel, as well as regulations to cut pollution and waste in the agricultural sector.

All of these measures would need to be significantly more ambitious than the ones passed by Congress, the idea being that, hopefully, green disruptors in deep-blue states like California can balance out gas-guzzling Luddites in red states like Texas, netting a Florida-size emissions reduction every year for the rest of the decade.

Fourth, and I’m reading between the lines of the Rhodium report a bit here, the invisible hand of the market will need to be a helping one. Solar panels, wind turbines, batteries, and other clean technologies will need to keep getting cheaper, outcompeting fossil fuels on cost. And it probably wouldn’t hurt if dirty energy, for one reason or other, also became more expensive. Here, larger government and corporate actors…