The Tokyo Olympics, assuming they go ahead later this month, will be powered by a fuel with ambition – hydrogen. The Olympic flame is already burning it. The Olympic village will be powered by hydrogen made at a solar power plant in the exclusion zone created after the Fukushima nuclear accident a decade ago. Toyota’s Mirai cars, which run on hydrogen-fuel cells, will provide most of the Games’ official transport.

“The 1964 Tokyo Olympics left the Shinkansen high-speed train system as its legacy. The upcoming Olympics will leave a hydrogen society as its legacy,” Yoichi Masuzoe, then governor of Tokyo, declared in 2016.

Japan, once a passionate advocate of nuclear energy, now has serious hydrogen ambitions. The country has the world’s largest network of hydrogen filling stations. It is planning to replace fossil fuels with hydrogen in heavy industries such as steel-making. And it has a head start in organising imports of the fuel. In 2019, Kawasaki Heavy Industries launched the Suiso Frontier, the world’s first ship designed to carry liquefied hydrogen. It aims to tap promised Australian hydrogen production.

Neighbouring South Korea has similar plans. In March this year, car-maker Hyundai, the SK Group conglomerate and others announced a US$38-billion project to develop a hydrogen-based economy in the coming decade.

Wide-spread use of hydrogen, it if really happens, will have been a long time coming. The first hydrogen-powered engine was working as long ago as 1807, and people were proposing making hydrogen by electrolysing water, to replace coal as early as the 1860s. But coal and oil were always cheaper. And the Hindenburg disaster, when a hydrogen-filled airship exploded in 1937, gave the fuel a reputation as unsafe.

There is talk that a global “hydrogen economy” can emerge to save the climate from carbon emissions. Hydrogen could power trucks, ships and planes and be used to produce everything from cement to steel and fertiliser. Saehoon Kim, the head of Hyundai’s fuel cell division told a British trade association webinar last year: “In the past, our technology and industry was all about collecting oil, delivering oil and using oil. And now, in the future, it will be collecting sunshine, delivering sunshine and using sunshine – and what will make that possible is hydrogen.”

Others are much more sceptical. “It is only ever going to be a niche energy source,” said Tom Baxter, a chemical engineer at the University of Aberdeen.

With current technology, hydrogen has an advantage for fuelling industrial processes where temperatures above 400C are required, Baxter added. But otherwise, green hydrogen will usually lose out to electricity where the latter can do the job. “Green hydrogen can never be cheaper than the green electricity needed to make it,” he said.

Hydrogen is rarely burned directly as a fuel source. Instead it is used as a carrier of energy, made where cheap energy is available for manufacture and shipping round the world to where it is needed. Usually that means in a fuel cell inside a vehicle engine, where the gas is mixed with oxygen, releasing its energy and emitting only water vapour.

In the past two years, electric cars have stolen a march on hydrogen, with most major car makers bringing out models and some, like General Motors, promising to manufacture only electric vehicles within 15 years. They have government backing too, with heavy spending on recharging networks. But for other fossil-fuel guzzling transport systems which cannot easily plug into the mains, such as long-distance shipping and aviation, hydrogen may turn out to be the key to lowering carbon emissions. 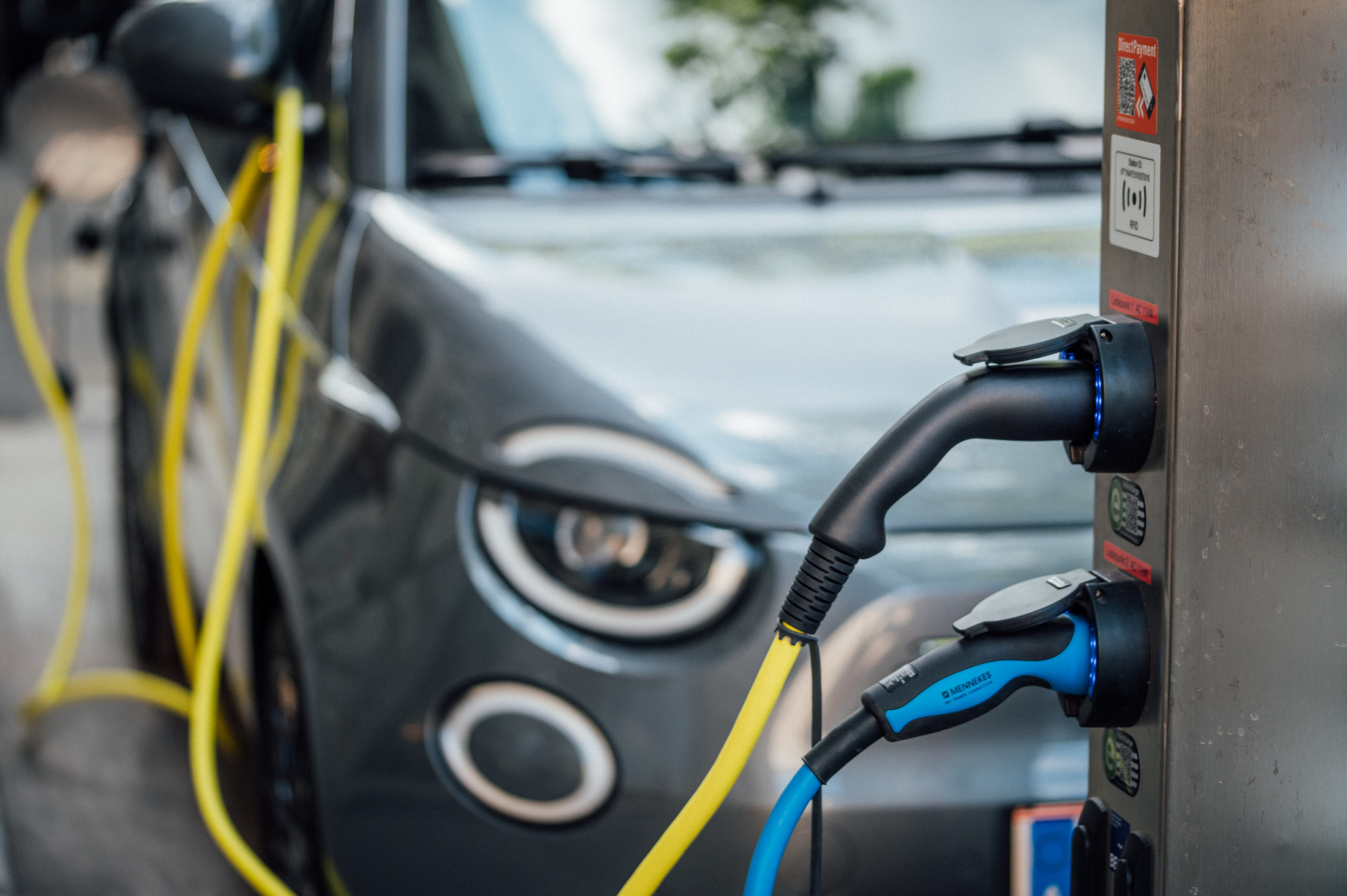 Hydrogen may have lost, to electricity, the competition to power the next generation of personal vehicles (Image: Ivan Radic / Flickr, CC BY 2.0)

The gas contains more energy for every tonne than any fossil fuel, and avoids the need for batteries. But manufacturing it takes a lot of electricity. So it is only as climate friendly as the energy used to produce it. Engineers thus distinguish between grey, blue and green hydrogen. Grey is made from natural gas or coal, and has a large carbon footprint. Blue is also made from fossil fuels but the carbon dioxide emissions are captured or re-used. Green is from renewable electricity and need have no carbon footprint at all.

Right now, grey hydrogen is cheapest and the predominant type for industrial uses. China produces around a third of the world’s hydrogen, largely from lignite coal. Russia is working on plans to use its abundant gas reserves to produce grey and blue hydrogen. To be a viable climate-friendly alternative to fossil fuels, manufacturers would have to capture the CO2 generated during production and bury it out of harm’s way. However, carbon capture and storage (CCS) is still very much work in progress.

Baxter, of the University of Aberdeen, said fossil fuel companies are behind the push to promote hydrogen as an alternative to electricity for everything from vehicle fuel to home heating. Oil giant BP is considering plans for a blue hydrogen plant on Teesside in England that it says would capture and store the resulting CO2 emissions underground.

In their long-term plans, major oil companies are looking at hydrogen as a potential source of income, once demand for petrol and diesel starts petering out. Their move towards alternative fuels has been painfully slow. BP will make a final investment decision on Teeside only in three years’ time and it doesn’t expect to start actual construction before 2027 – three years before all new cars in the UK are expected to be electric.

If those subsidies were removed, alternative fuels like hydrogen would stand a better chance of becoming widely adopted

“For the moment, fossil fuels are cheaper and much more widely available than hydrogen. This comes in part because of large government subsidies across the globe which amount to US$400 billion. If those subsidies were removed, alternative fuels like hydrogen would stand a better chance of becoming widely adopted,” said Seifi Ghasemi, chief executive of US industrial gas company Air Products at a BNEF conference in New York this year.

The real prize, if the world is serious about developing a low-carbon hydrogen economy, would have to be the mass production of green hydrogen. Some countries already see themselves as potentially the “Saudi Arabia of hydrogen”, mass producing the fuel using cheap renewable energy. Among them are Canada and Iceland, which both have abundant hydroelectricity that could help manufacture it. Iceland also has geothermal energy. Morocco is rapidly developing solar power in the Sahara desert and has designs on hydrogen production.

Saudi Arabia has its own plans. The country recently announced that, with Air Products, it is building a US$5-billion green hydrogen plant along the shore of the Red Sea. A vast estate of solar panels and wind turbines will eventually cover a patch of desert the size of Belgium, powering what would be the world’s biggest hydrogen factory. Production is set to begin in 2025.

The project would be part of the proposed eco-city of Neom, a scheme of the country’s de facto leader Mohammed bin Salman. Besides supplying the eco-city, the hydrogen would be exported, one day replacing Saudi oil with Saudi hydrogen on world markets.

Neighbouring Oman has plans to go even bigger. Its proposed US$30-billion hydrogen plant on the shores of the Arabian Sea would export both green hydrogen and “green ammonia”, to replace fossil-fuel produced chemical fertilisers.

Australia has similarly ambitious plans for five giant “hydrogen hubs”. Last year it said it would turn an area of desert more than twice the size of Luxembourg in Western Australia into a green hydrogen production facility, with 10 million solar panels and 1,500 wind turbines.