The Social Democrats (SDP), Greens and Liberal (FDP) parties agreed to formalise coalition talks on 15 October following the German general election at the end of September. Within these talks is an agreement to end coal by 2030.

While the exact details of the coal exit pathway remain unclear, we ran a scenario analysis with a potential pathway to closure of all coal and lignite plants in the country by 2030 to measure the impact on prices, generation, net trade and emissions.

The results indicated that Germany would see 5% higher power prices in the late 2020s as the result of coal and lignite closures eight years earlier than expected.

Europe would see a significant emissions reduction in emissions as well as a continent-wide increase of around 20TWh per year in gas generation in the tightest supply years prior to 2030, of which one-quarter would be generated in Germany.

The generally moderate price increase in neighbouring markets, as well as the relatively low level of coal and lignite generation in the 2030s in any case due to rising carbon prices, means that while the earlier coal exit does have a significant impact on emissions, it would not cause astronomically higher prices or supply tightness in the region, according to our modelled scenario.

• Following the verbal commitment by the likely new German government to close coal and lignite by 2030, we modelled a scenario in which all plants left the grid before 2030
– Due to the likely legislative time-frame, we do not expect any additional closures to take place in 2022 but did assume some additional hard-coal closures would take place from 2023 onwards either via additional tendered capacity or voluntary closures
– For lignite closures, these would start from 2025 onwards due to the political sensitivity of closing plants en masse as well as their enduring importance to Germany, especially in light of the imminent nuclear exit 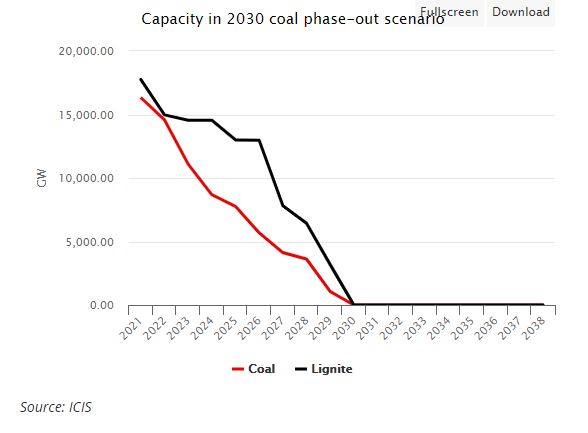 • In the 2023-2026 period, generation from coal, gas and lignite remains at similar levels as seen in our Base Case with moderate and generally inefficient capacity closures taking place
– Such plants would not otherwise generate during many hours, especially given carbon prices growth over the next decade

• From 2027-2030 lignite assets that form a significant part of the German baseload leave the grid in large quantities and annual generation falls by an average of almost 20TWh for lignite but just 3TWh for coal
– With carbon prices rising above €70/tCO2e from 2027 onwards this means that fuel switching from coal to gas is already very high in Europe, so the impact of capacity closures is relatively small
– In contrast, the closure of much of Germany’s lignite fleet in these years would drive up total European gas generation by an average of more than 15TWh per year, of which 6TWh would be produced in Germany 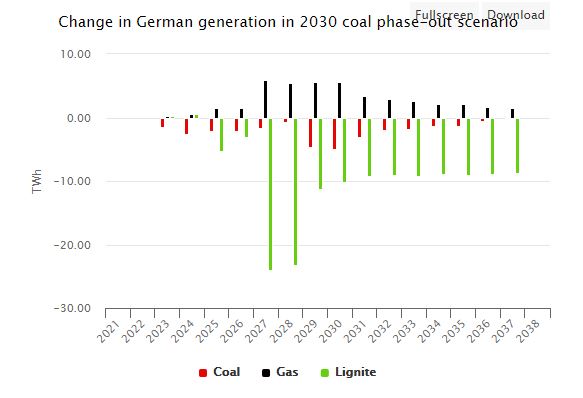 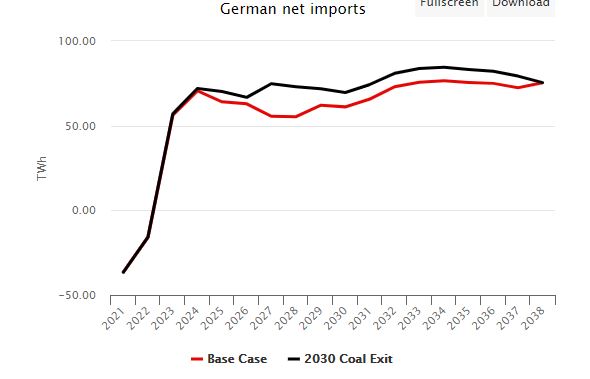 • The faster coal exit would reduce emissions by approximately 120m tonnes of carbon across Europe between 2023 and 2038 – an annual average of 8m tonnes – with the most significant reduction in the 2027 to 2030 period
– Of this, Germany would reduce its emissions from domestic generation by 160m tonnes but its additional gas imports from connected markets would offset some of these carbon savings
– While significant, this represents a reduction across Europe of 5% between 2027 and 2030 and 3% thereafter. The emission saving is negligible pre-2027

• The modelling demonstrates that European gas generation and the strong interconnectivity between Germany and its neighbours would be sufficient to replace earlier coal and lignite closures without major repercussions and a moderate price impact – see section below
– Interconnector expansion and the ample gas generation capacity across the continent as well as in Germany means that there is enough supply to replace coal closures and an emissions saving in addition to this
– However, this does not take into account potential volatile weather variation or energy price extremity as we have seen in 2021 due to the nature of our model assumptions

• An important point to note is the moderate impact of closures on coal generation due to market dynamics that put the technology firmly out of favour, generating less than 10TWh per year from 2027 onwards in our Base Case
–  e European gas generation increase is to replace the earlier lignite closures with annual generation above 10TWh until the early 2030s in contrast

• The likelihood of the faster coal exit being implemented is quite high due to the strong mandate given to the new coalition, the very high importance of climate issues on the German electoral agenda, and the speed with which all three parties have agreed to the date as a flagship policy

• The amendments to the existing law relating to new phase-out pathways, potential compensation if any, and proposed replacement technologies are yet to be announced
– Clarity will likely emerge in 2022 assuming the three parties finalise talks and enter into government 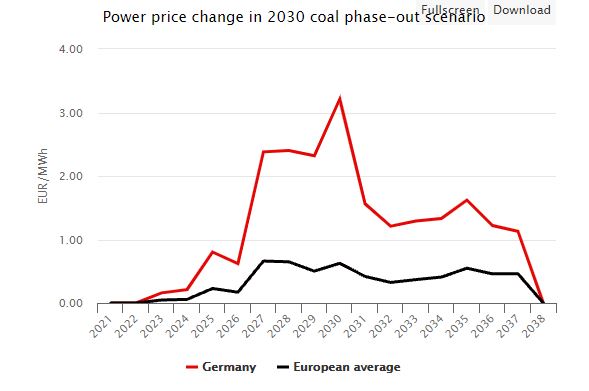