TOKYO — The failure of Group of 20 environment and energy ministers to agree on a global temperature goal exposes the divide between advanced and emerging-market economies on the pace of industrial transformation needed to slow climate change.

Coal and a target for limiting global warming were two of the toughest sticking points between the U.S., Japan and European nations and China, Russia and India, according to Japanese government sources who traveled to Naples for the G-20 talks on Friday.

The ministers also stopped short of a making commitment to phase out coal power in their meeting communique — a breakdown that clouds the prospect for a meaningful agreement at the United Nations climate conference starting in October.

Roberto Cingolani, minister for ecological transition of Italy, this year’s G-20 president, told reporters after the meeting that negotiations with China, India and Russia — all heavy users of coal power — had been “difficult.”

Friday’s meeting marked the first time for G-20 ministers to discuss climate change and energy in the same forum. There were hopes it would build on momentum from the Group of Seven summit in June, when leaders agreed to achieve net-zero greenhouse gas emissions by 2050 and end state support for exports of coal-fired power plants. The G-20 accounts for about 80% of global greenhouse gas emissions. 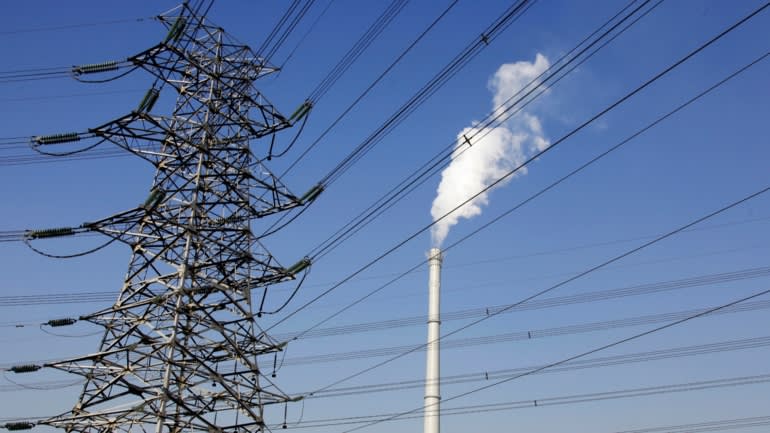 Power lines in Beijing: The Group of 20 — which includes top emitters China, the U.S., the EU  and India —  accounts for about 80% of global greenhouse gas emissions.

G-20 members are part of the Paris climate agreement, which sets a goal of limiting the global temperature increase to well below 2 C, while making efforts to cap the rise at 1.5 C. But for some nations, Cingolani said, accelerating efforts needed to reach this second hurdle is difficult.

G-7 leaders agreed in June to pursue the 1.5 C limit. Some developing economies, however, see this as a further aspiration, rather than a commitment. On coal, China continues to export power plants that burn the fuel to other Asian nations.

Japan has taken heat from climate activists for its own support for overseas coal power plants, and for still-high domestic reliance on the fuel for electricity.

During working-level G-20 talks, oil producers including Saudi Arabia and Russia sought to limit the use of the word “decarbonization” in the final communique.

According to Japan’s Environment Ministry, ministers at Friday’s meeting agreed to seek higher emissions cut targets for 2030 and accelerate efforts in the 2020s. Tougher issues were left for the G-20 summit in October.

China’s official Xinhua News Agency on Friday reported Cingolani as saying that despite the lack of consensus, no country at the meeting put the Paris agreement in doubt. Chinese President Xi Jinping pledged at the U.N. General Assembly last year that his nation would seek to reach peak carbon dioxide emissions before 2030 and achieve carbon neutrality before 2060.