China has started unloading a small number of Australian coal shipments despite an unofficial import ban, analysts said, in a move underscoring the intensity of the power crunch facing the world’s second-largest economy.

Nick Ristic, lead dry cargo analyst at Braemar ACM Shipbroking, said a handful of Australian cargoes waiting outside Chinese ports since a ban came into force a year ago had headed into berth last month and draft change had been observed, indicating that the coal had been unloaded. He said 450,000 tonnes of coal had been discharged.

It is possible the discharged coal had been resold to other countries, but traders said this was unlikely because of signals from Chinese authorities that it would be allowed to clear customs.

Australia shipped 35m tonnes of thermal coal to China in 2020 and closer to 50m tonnes in 2018 and 2019, according to Argus Media, a commodity price assessment group. After November 2020, overall coal exports to the Asian nation dropped to “effectively zero”, according to Wood Mackenzie. 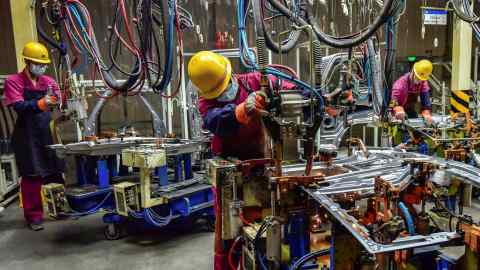 But since then, Chinese provinces have been hit with power rationing so severe that in some places factories have been allowed to operate for only two days a week, threatening economic growth and the global supply chain.

Lara Dong, who leads Greater China power and renewables research at IHS Markit, said the move to allow a few shipments to start being delivered was unlikely to be a sign of a broader policy reversal. “I see it as a sign of policy loosening, it doesn’t seem to mean a big difference in coal imports from Australia,” she said.

The shortages, which have also hit some household users, gathered steam in large part owing to coal supply shortages and higher domestic and international prices. This has made coal-fired power generation uneconomic because of price controls.

The most actively traded coal contract on the Zhengzhou Commodity Exchange was near a record high of Rmb1,393.60, or $216 a tonne, on Thursday, the last day before a week-long public holiday in China. It has risen by almost 75 per cent in the past month.

Provinces including Jilin have in recent days called for increased imports of coal from Indonesia, Russia and Mongolia. Reports on Monday said China’s Zhejiang province had brought in its first shipment of thermal coal from Kazakhstan.

Dong said it was unclear whether imports would also be a cure for the country’s power woes. “It’s so expensive now. The government is encouraging imports but who will pay?”

While China’s biggest coal miners have pledged to increase production and go all out to help beat the power crisis, analysts are sceptical they can respond quickly enough to make a difference this winter.

Conflicting policy signals have also contributed to the crunch, as the country implements so-called “dual control” regulations aimed at decreasing both energy consumption and energy intensity. Provinces have been racing to meet strict consumption targets under the rules, after a large number failed to reach the goals in the first half of the year.

Energy is the world’s indispensable business and Energy Source is its newsletter. Every Tuesday and Thursday, direct to your inbox, Energy Source brings you essential news, forward-thinking analysis and insider intelligence. Sign up here.