by Eleonora Vio and Daniela Sala

The heart of Bobov Dol power plant is a hot, dark, noisy chamber. Lumps of coal litter the floor beside pools of oil and water leaking from decades-old machinery, relics of the Soviet era when workers flocked to build one of Bulgaria’s largest coal-fired facilities.

Coal dust hung thick in the air when OCCRP visited the plant in July 2020, leaving reporters coughing through the masks they wore to protect against COVID-19. Several workers operated the factory’s vast furnace and generators, laboring in the sooty air and searing heat with no masks at all.

Bobov Dol, based in a major coal-mining district an hour’s drive southwest of Sofia, is one of more than a dozen mines, power plants, and heating companies believed to be controlled by Hristo Kovachki. The secretive tycoon emerged as a key player in Bulgaria’s energy sector during a wave of privatizations in the 2000s, building a network of coal assets that he is now thought to control through companies in the U.K. and Cyprus.

As Europe moves toward using cleaner forms of energy, many of these assets have become increasingly outdated, inefficient, and mired in debt. Carbon taxes have further raised their cost of operation.

But two of the power stations associated with Kovachki appear to have found a novel way to balance the books. Official emissions data, analyzed by OCCRP, shows Bobov Dol and another coal-fired plant linked to him — Brikel, in south-central Bulgaria — may have under-declared their carbon dioxide emissions for the past three years, saving at least 26.6 million euros.

The suspect data was confirmed as accurate by a company set up by a 27-year-old with no apparent background in the emissions verification industry. Yet within months it had gained 12 clients — all plants associated with Kovachki. 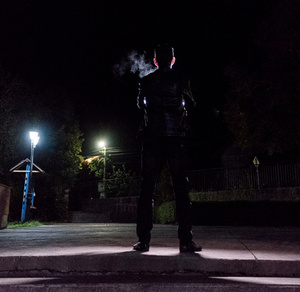 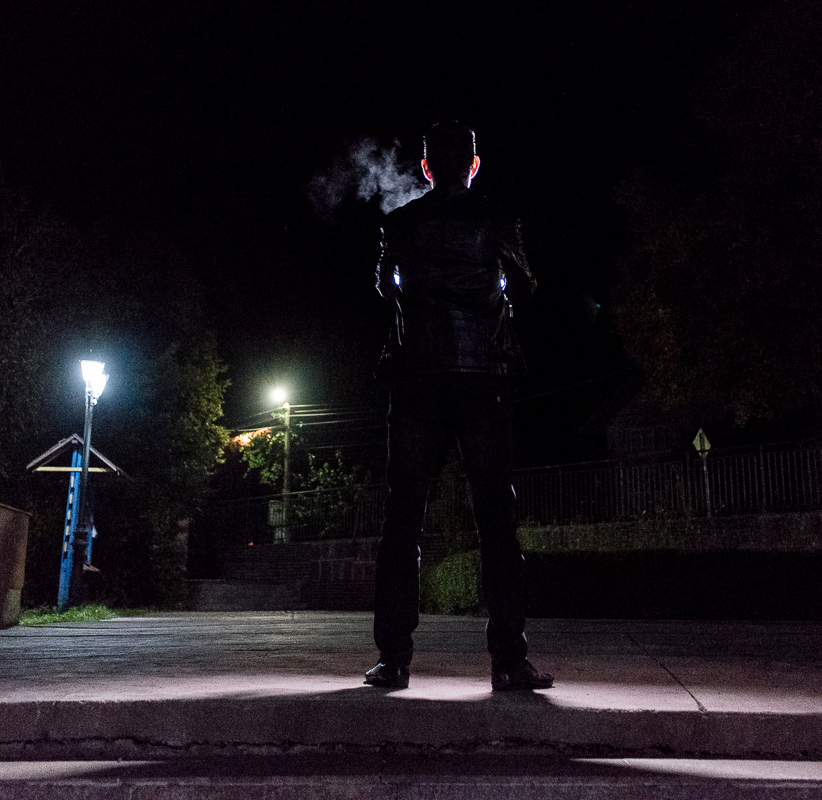 
A worker at Bobov Dol, who described terrible working conditions inside the plant. He asked not to be named for fear of losing his job.

Workers say conditions inside the Bobov Dol plant are so bad they fear for their safety, and miners in the coal mine that feeds it have reportedly staged protests over labor conditions in previous years. Locals now refer to the surrounding town that gave Bobov Dol its name as “Robov Dol,” meaning “city of the exploited people.”

One former employee told OCCRP he was burned after his leg slipped into an unmarked hole while at work. “It was full of hot ashes,” he said, speaking on the condition of anonymity. “I couldn’t report them for fear of losing my job and putting my father’s job at risk as well.”

Another Bobov Dol worker, who also asked not to be named to protect his job, said that “with no investment and little renovation, the plant is increasingly dangerous.”

Bobov Dol’s Director Lyubomir Spasov acknowledged that the working area around the coal process could get dirty, but denied that the conditions were as bad as reported, adding: “The working environment is better than many other workplaces.”

Two spokespeople for Kovachki refused to comment on this story.


Retired miner Georgi Stefanov visits his parents in the cemetery near Bobov Dol, which his father helped to build.

When Bulgaria joined the EU in 2007, it also joined the embryonic Emissions Trading System (ETS), a mechanism designed to reduce greenhouse gas emissions that today forms a cornerstone of the bloc’s climate change policy.

But just three-and-a-half years later, it was temporarily suspended for providing unreliable data on the country’s emissions. The Environmental Minister at the time, Nona Karadzhova, reportedly blamed the “criminal inaction of the previous government” for the suspension.

Smaller plants use the national average emissions factor, but large plants like Bobov Dol and Brikel are meant to use figures calculated by accredited laboratories.

Reporters who analyzed official data the two plants submitted to the EEA found they appear to have significantly underreported their emissions factor for the past three years. 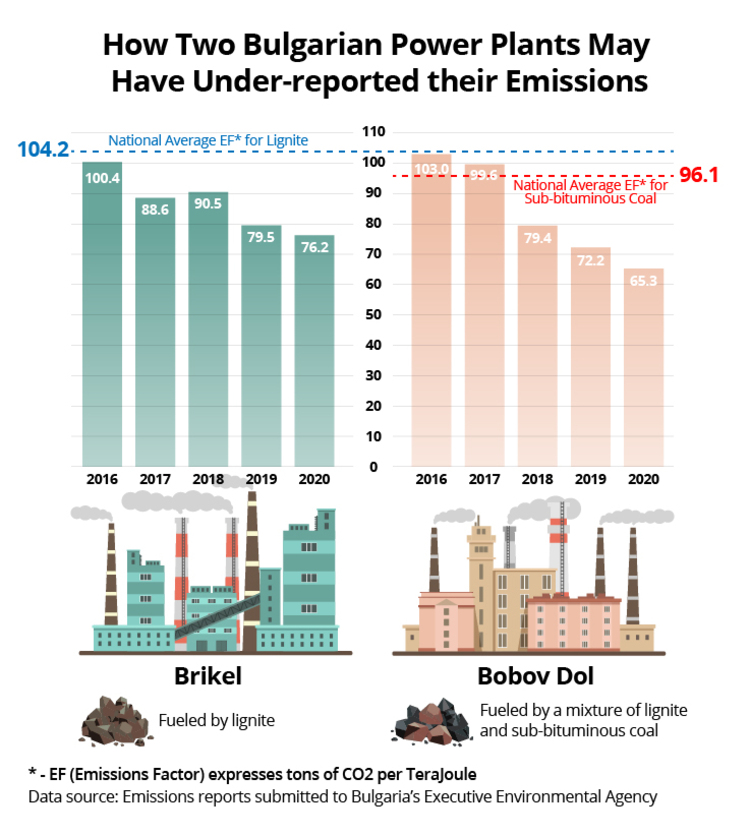 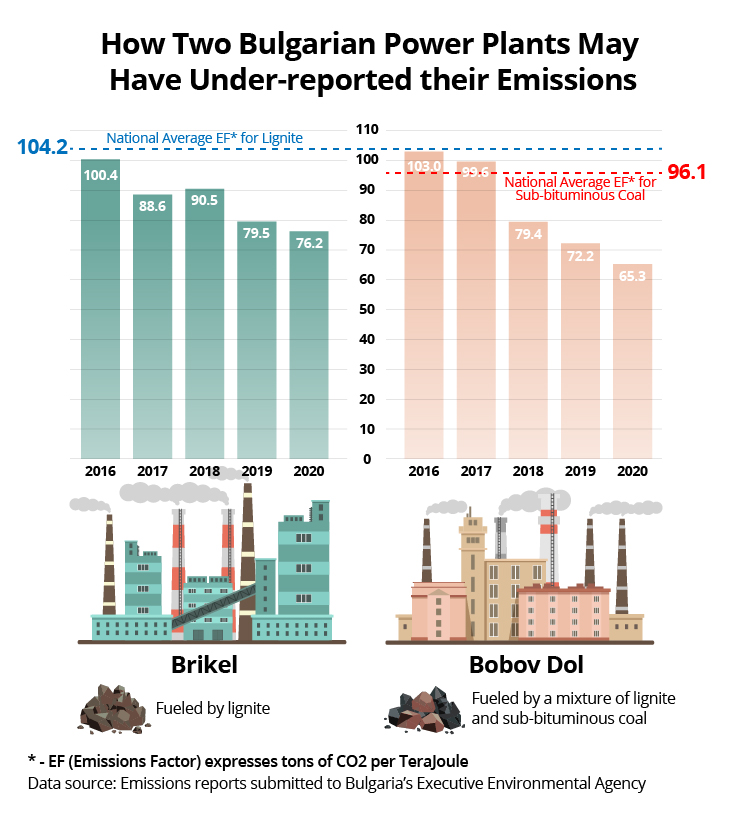 Peter Seizov, a sustainability expert who has consulted with the EEA over a decade, said the values were so clearly incorrect that he left them out of reports he wrote for the EU determining Bulgaria’s average emissions factors for those years.

“I do exclude these values from calculation,” Seizov said. “I consider them outliers compared to the default values … to the values reported by other plants in the region, and to values provided by the same plants during past periods.”

Working out how much Bobov Dol and Brikel have saved by under-declaring their emissions is a tricky business because the price of carbon dioxide under the ETS varies widely. Based on the annual average carbon price of around 21 euros per ton in 2019 and 27 euros in 2020 and 2021 — which an expert said were conservative figures — OCCRP calculated the two plants together may have avoided paying the EU between 26.6 million and 32.2 million euros.

Yanilin Pavlov, the executive director of Brikel, said the plant reported lower emissions because it had started to use more enriched coal. He added that the emissions had been “calculated on…

Read More:Bulgarian Coal Magnate’s Plants May Have Saved Around 30M Euros by Under-Declaring