Design techniques and operating experience with Powder River Basin (PRB) coals have advanced significantly over the past 35 years for boilers that were originally designed for this fuel. Today, boiler installations looking to effectively utilize PRB coals fall into two primary categories: units that were initially designed for bituminous or other coals and units that were designed for PRB. The older PRB units were originally designed using less-conservative design standards. As a consequence, older designs may have significant performance deficiencies for today’s operations.

Current boiler design, combustion, and environmental techniques are used when evaluating upgrades to either of the aforementioned original design cases. The specific types of PRB conversion or upgrades commonly performed fall into the following five categories.

Best Designs Based on Solid Data

The predictability of those models relies heavily on the accuracy of actual boiler data on existing fuels over the proposed operating profile plus the use of the boiler manufacturer’s knowledge and database. The manufacturer will have studied many of the contemplated boiler changes, applied them, and evaluated them versus design.

Clear communication between the boiler designer and owner is imperative regarding expectations of how the boiler will operate on PRB. The boiler manufacturer needs to know the range of PRB fuels expected to be considered, current boiler operating problems expected to be resolved, and boiler performance expected over the load range, including impacts on emissions.

Table 1 shows a comparison of operating parameters at 100% load on a 400-MW boiler firing bituminous and PRB coals. The performance differences between the two coals are significant and impact a bituminous to PRB fuel switch in the following ways: 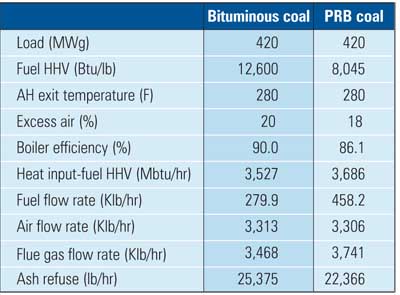 When a boiler is switched from bituminous to PRB coal, the furnace exit gas temperature (FEGT) must be kept 50F (average) below the PRB ash-softening temperature. Figure 1 shows the natural FEGT difference over the load range on the same furnace size for bituminous and PRB coals. As an example, with a furnace originally designed for bituminous coal with a heat release at full load of 65,000 Btu/hr/ft 2, the FEGT is 1,920F. At full load on PRB, the FEGT will climb to 2,100F. If the PRB coal ash has a softening temperature of 2,000F, the maximum FEGT to prevent excessive slagging in the furnace is 1,950F. To achieve this, the furnace is modified in two ways: 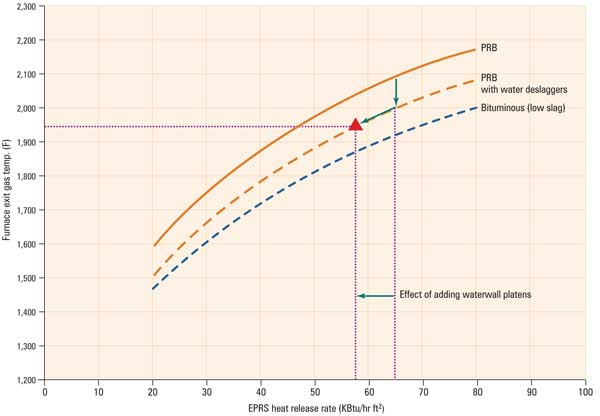 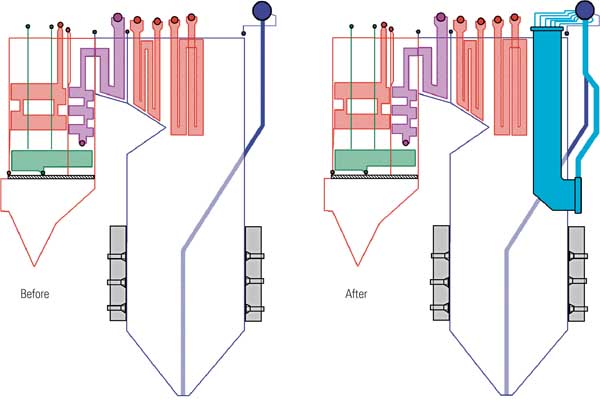 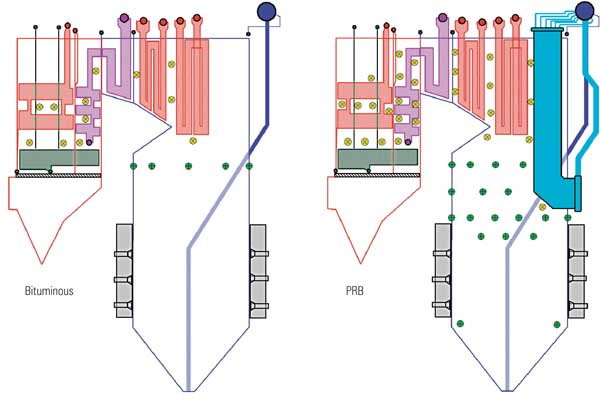 Backpass fouling characteristics of PRB ash are typically much more difficult to handle from a design standpoint than bituminous coal ash. To address this issue, free or open space between convective tube bundles must be large enough to preclude ash pluggage between tube assemblies. Figure 4 is a proven design standard that sets minimum tube clearance between tube rows as a function of flue gas temperature and ash-fouling characteristics. PRB coal ash is almost always treated as severe fouling in this regard. This guideline is used for setting convective superheater, reheater, and economizer spacing for solid fuel – fired boilers. 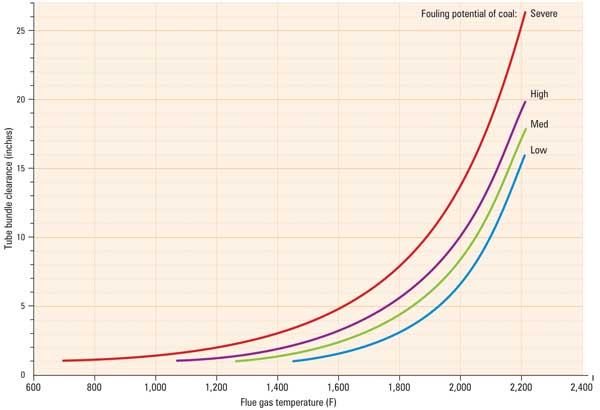 In addition to having sufficient convective tube clear space, tube bundle height should not exceed 6 feet, and a greater number of sootblowers should be used to achieve desired cleaning. Figure 3 shows convective pass sootblower applications for bituminous and PRB coal.

If a switch to PRB is planned on a unit originally designed for high-sulfur bituminous coals and the unit is equipped with selective catalytic reduction (SCR) system, an electrostatic precipitator (ESP), and wet flue gas desulfurization (WFGD) system, their impacts on the change should be taken into account.

In the SCR system, to control the fouling potential with PRB ash, the catalyst grid structure pitch should be greater than that typically used for bituminous coal applications. Where a pitch of 6.9…