In June 2010, the body of Sen. Robert Byrd lay in repose on the floor of the U.S. Senate, offering his colleagues a final opportunity to pay their respects. For years, Byrd had lorded over West Virginia politics, and he continues to hold the record for longest serving U.S. senator. He was also the most recent member of Congress to have led a chapter of the Ku Klux Klan. Before besting Ted Kennedy for the role of Senate majority whip, Byrd solidified his power by funneling millions of taxpayer dollars to West Virginia as chair of the Senate Appropriations Committee.

Byrd was also the progenitor of the eponymous Byrd rule, which placed expansive limits on what can be included in the budget reconciliation process that President Joe Biden is now attempting to use to pass his critical policy objectives. Joe Manchin, then the governor of West Virginia, was on the cusp of rising to fill Byrd’s seat in the upper chamber, while also staring down the potential collapse of everything he’d built over his decadeslong career in politics. As Manchin launched his Senate campaign, a federal investigation was bearing down on his administration and its inner circle.

“It’s one of those things, you look at the timing, and you question the timing of how all this would have happened,” Manchin told Politico at the time. “But it is what it is, and I think the people know better.

Weeks after Byrd’s death, federal subpoenas were sent to agencies throughout Manchin’s administration. Though the Manchin governor’s office wasn’t directly subpoenaed, investigators were looking into multiple people and agencies with a web of ties to Manchin, including Manchin’s former chief of staff and confidante, Larry Puccio, then the head of the state Democratic party. In 2006, as Manchin’s chief of staff, Puccio had also met with Mon Power lobbyists and advocated for them to petition for a rate increase for West Virginians’ electricity that kept Manchin’s company’s biggest coal customer afloat, the details of which have not been previously reported.

The full purview of the investigation was never made clear. In addition to a subpoena to the Department of Transportation’s Division of Highways investigating land seized through eminent domain, the government sought campaign finance records from the secretary of state’s office on Manchin’s 1996 gubernatorial bid and from the department of administration’s aviation division.

Sam Runyon, a spokesperson for Joe Manchin, told The Intercept, “Senator Manchin has devoted most of his adult life to public service. At every stage he has been compliant with financial and ethical standards. He has never been the subject of a federal investigation.” 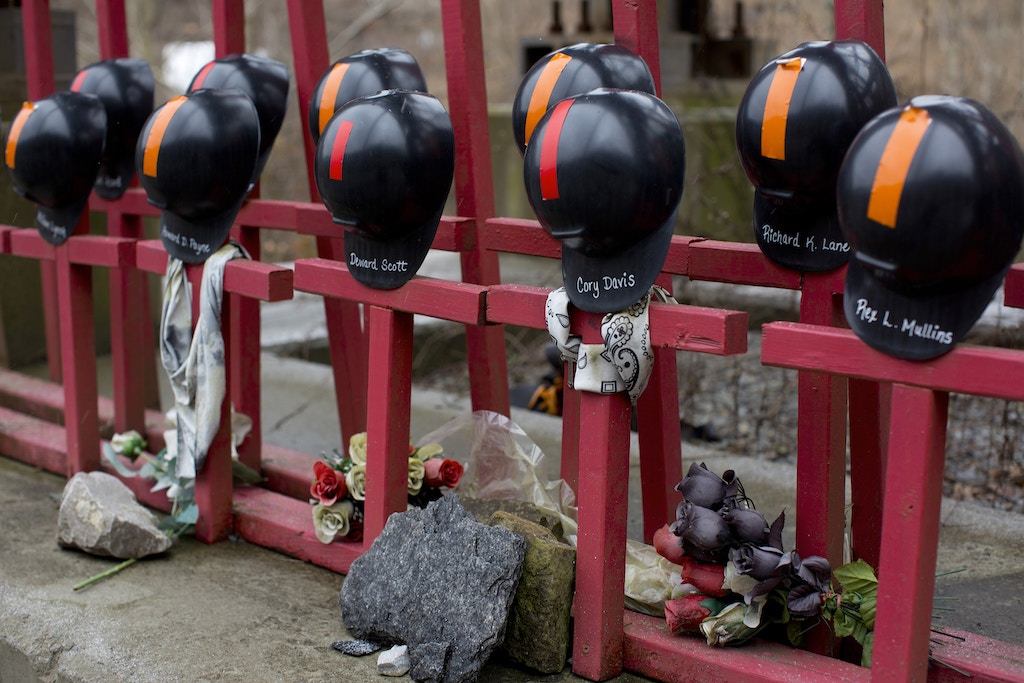 A memorial at the base of Upper Big Branch mine outside of Whitesville, W.Va., is a tribute to the 29 miners who died there in an explosion in 2010.

The state government spent $60,000 to hire an independent investigator to respond to the federal subpoenas, which a deputy assistant general said was necessary for maintaining a totally hands-off approach, given the governor’s Senate campaign. Manchin had two connections to the family of the U.S. attorney overseeing the probe. The U.S. attorney for the southern district of West Virginia at the time of the probe was Boothe Goodwin, nephew of Manchin’s Secretary of Culture and Arts Kay Goodwin. Boothe Goodwin was also the cousin of Carte Goodwin, Manchin’s former legal counsel and the man he would appoint as interim senator, before filling the seat himself when Carte declined to run in the special election four months later.

Ultimately, only one person was charged with tax evasion and mail fraud, to the disbelief of the judge hearing the case. Manchin won election to the Senate by over 50,000 votes, narrowly retaining Democratic control of the Senate. Years later, Boothe Goodwin would go on to run a super PAC aiding Manchin’s reelection.

For more than 20 years, Manchin stayed a step ahead of federal investigations as they closed in around his inner circle. A review of statehouse investigation reports, public court records, and sealed documents obtained by The Intercept reveals a decadeslong history of investigations into employees, contractors, and business associates of Manchin. These incidents involve investigations into tax evasion, grand larceny, campaign finance violations, and an investigation by federal agencies including the FBI and IRS into a wide range of alleged criminal activity centered around Manchin’s governor’s office.

“We had to change a lot of things about the way we do business in West Virginia, by making the bidding process more open, transparent, getting financial advisers,” Manchin told Politico in 2010. “So there’s a lot of people’s whose feathers were rubbed wrong, and I think there might be some of that coming back to roost.”

In both the 2010s and the 1990s, federal investigations involving confidential informants petered out, with only low-level players facing prosecution, sentencing, and jail time. The review of Manchin’s career reveals a tangled political and professional journey that has led the senior senator to the summit of global power, making him the man who holds in his hands the fate of the fossil fuel industry, and in turn, the fate of the planet.

The 2010 investigation hinged on an FBI informant who had performed no-bid contracting work on the governor’s mansion and had a history of “fraudulent behavior,” according to prosecutors. The investigation seems to have originated in illegal contracts for window treatments but soon extended far beyond that. The Charleston Gazette-Mail reported how extensive the investigation was at the time: “The probe included federal subpoenas issued last summer to the state Division of Highways and reportedly the state Department of Administration, including flight records of state aircraft that are used primarily by the Governor’s Office. Campaign finance records from Manchin’s unsuccessful 1996 run for governor also were subpoenaed by a federal grand jury.”

Earlier in 2010, Manchin had ridden on Massey Energy CEO Don Blankenship’s private jet, days after the Upper Big Branch mine disaster which took the lives of 29 miners in a Massey-owned mine. At the time of the disaster, a spokesperson for Manchin said that a state aircraft wasn’t available and that Blankenship would be reimbursed for the cost of the flight.

Among the schemes that had caught the eye of federal investigators involved a major $150 million highway project running through Manchin country: the governor’s home base of Fairmont, West Virginia. Fairmont is in the heart of Manchin’s coal empire, one town over from Farmington where his father served as mayor. Manchin and his family own considerable property in Fairmont, and his family company Enersystems continues to lease coal reserves outside of the city limits. Wrapped up in the investigation was the real estate firm of Larry Puccio, the longtime Manchin aide and confidante. 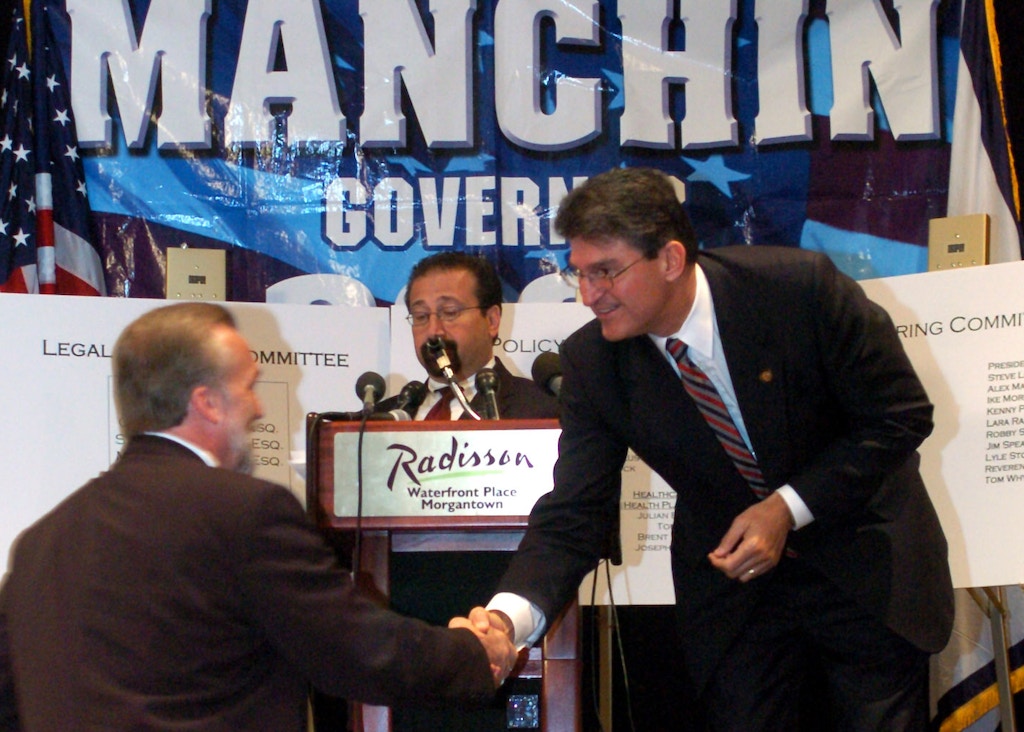 Joe Manchin, right, along with Larry Puccio, center, welcome Scott Rotruck of Morgantown to the transition team at a press conference on Nov. 3, 2004, in Morgantown, W.Va.

Puccio was Manchin’s chief of staff before resigning in 2010 and registering as a lobbyist one week later, prompting state legislators to create a one-year period before former political officials can transfer to lobbying in the private sector. He then went on to become the West Virginia Democratic party boss before abandoning that post last year to support Republican Gov. Jim Justice’s candidacy. In 2017, both Puccio and a spokesperson for Manchin made contradictory statements to the press about their respective connections to a firm named in a $14.6 million hotel bankruptcy suit. Puccio is also a co-owner of the Wonder Bar Steakhouse in…